A miniature circuit breaker (MCB) automatically switches off electrical circuit during an abnormal condition of the network means in overload condition as well as faulty condition. Nowadays we use an MCB in low voltage electrical network instead of a fuse. The fuse may not sense it but the miniature circuit breaker does it in a more reliable way. MCB is much more sensitive to over-current than fuse. Handling an MCB is electrically safer than a fuse. Quick restoration of supply is possible in case of a fuse as because fuses must be re-wirable or replaced for restoring the supply. Restoration is easily possible by just switching it ON.

• The working principle of MCB

Whenever continuous over-current flows through MCB, the bimetallic strip is heated and deflects by bending. This deflection of bimetallic strip releases a mechanical latch. As this mechanical latch is attached with the operating mechanism, it causes to open the miniature circuit breaker contacts, and the MCB turns off thereby stopping the current to flow in the circuit. To restart the flow of current the MCB must be manually turned ON. This mechanism protects from the faults arising due to over-current or overload. 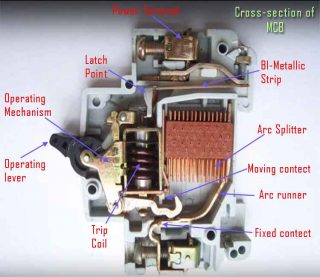 But during short circuit condition, the current rises suddenly, causing electromechanical displacement of plunger associated with a tripping coil or solenoid. The plunger strikes the trip lever causing immediate release of latch mechanism consequently open the circuit breaker contacts. This was a simple explanation of a miniature circuit breaker working principle.
An MCB is very simple, easy to use and is not generally repaired. It is just easier to replace. The trip unit is the main part, responsible for its proper working. There are two main types of trip mechanism. A bi-metal provides protection against overload current and an electromagnet provides protection against short-circuit current.

• Advantages of MCBs over Fuse

✓ Only disadvantage over fuse is, this device is costly

Molded case circuit breakers are a type of electrical protection device that is commonly used when load currents exceed the capabilities of miniature circuit breakers. They are also used in applications of any current rating that require adjustable trip settings, which are not available in plug-in circuit breakers and MCBs. 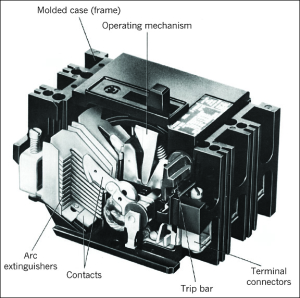 The traditional molded-case circuit breaker uses electromechanical (thermal magnetic) trip units that may be fixed or interchangeable. An MCCB provides protection by combining a temperature sensitive device with a current sensitive electromagnetic device. Both these devices act mechanically on the trip mechanism.

As with most types of circuit breakers, an MCCB has three main functions:

• Protection against overload – currents above the rated value that last longer than what is normal for the application.

• Against electrical faults – During a fault such as a short circuit or line fault, there are extremely high currents that must be interrupted immediately.

• Switching a circuit on and off – This is a less common function of circuit breakers, but they can be used for that purpose if there isn’t an adequate manual switch.

At its core, the protection mechanism employed by MCCBs is based on the same physical principles used by all types of thermal-magnetic circuit breakers.

• Overload protection is accomplished by means of a thermal mechanism. MCCBs have a bimetallic contact what expands and contracts in response to changes in temperature. Under normal operating conditions, the contact allows electric current through the MCCB. However, as soon as the current exceeds the adjusted trip value, the contact will start to heat and expand until the circuit is interrupted. The thermal protection against overload is designed with a time delay to allow short duration over-current, which is a normal part of operation for many devices. However, any over-current conditions that last more than what is normally expected represent an overload, and the MCCB is tripped to protect the equipment and personnel.

• On the other hand, fault protection is accomplished with electromagnetic induction, and the response is instant. Fault currents should be interrupted immediately, no matter if their duration is short or long. Whenever a fault occurs, the extremely high current induces a magnetic field in a solenoid coil located inside the breaker – this magnetic induction trips a contact and current is interrupted. As a complement to the magnetic protection mechanism, MCCBs have internal arc dissipation measures to facilitate interruption.

As with all types of circuit breakers, the MCCB includes a disconnection switch which is used to trip the breaker manually. It is used whenever the electric supply must be disconnected to carry out field work such as maintenance or equipment upgrades.

The Residual Current Circuit breaker RCCBs are the safest device to detect and trip against electrical leakage currents, thus ensuring protection against electric shock caused by indirect contacts. These devices must be used in series with an MCB or fuse which protects them from the potentially damaging thermal and dynamic stresses of any over currents. They also act as the main disconnecting switches upstream of any derived MCBs (e.g. domestic consumer unit).

Its working based on Kirchhoff’s Current Law i.e. the incoming current in a circuit must be equal to the outgoing current from that circuit. This circuit breaker is made such that whenever a fault occurs the current balance of line and neutral did not matches (imbalance occurs). Its circuit is made such that every instance it compares the value of incoming and outgoing circuit current. Whenever it is not equal, the residual current which is basically the difference between the two currents actuates the circuit to trip/switch off.

The basic operating principle lies in the Toroidal Transformer shown in the diagram containing three coils. There are two coils say Primary (containing line current) and Secondary (containing neutral current) which produces equal and opposite fluxes if both currents are equal. Whenever in the case there is a fault and both the currents changes, it creates out of balance flux, which in-turn produces the differential current which flows through the third coil (sensing coil shown in the figure) which is connected to relay. The Toroidal transformer, sensing coil and relay together is known as RCD – Residual Current Device. 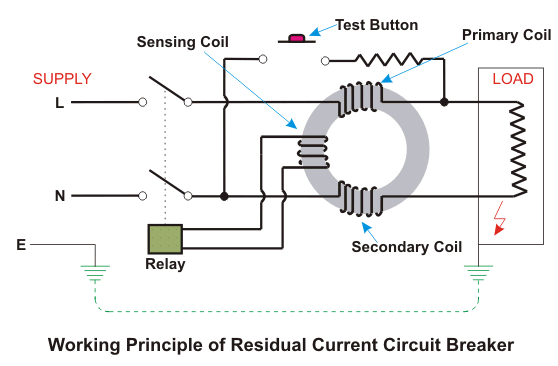 The test circuit is always included with the RCD which basically connects between the line conductor on the load side and the supply neutral. It helps to test the circuit when it is on or off the live supply. Whenever the test button is pushed current starts flowing through the test circuit depending upon the resistance provided in this circuit. This current passes through the RCD line side coil along with load current. But as this circuit bypasses neutral side coil of RCD, there will be an unbalance between the line side and neutral side coil of the device and consequently, the RCCB trips to disconnect the supply even in normal condition. This is how the test circuit tests the reliability of RCCB.